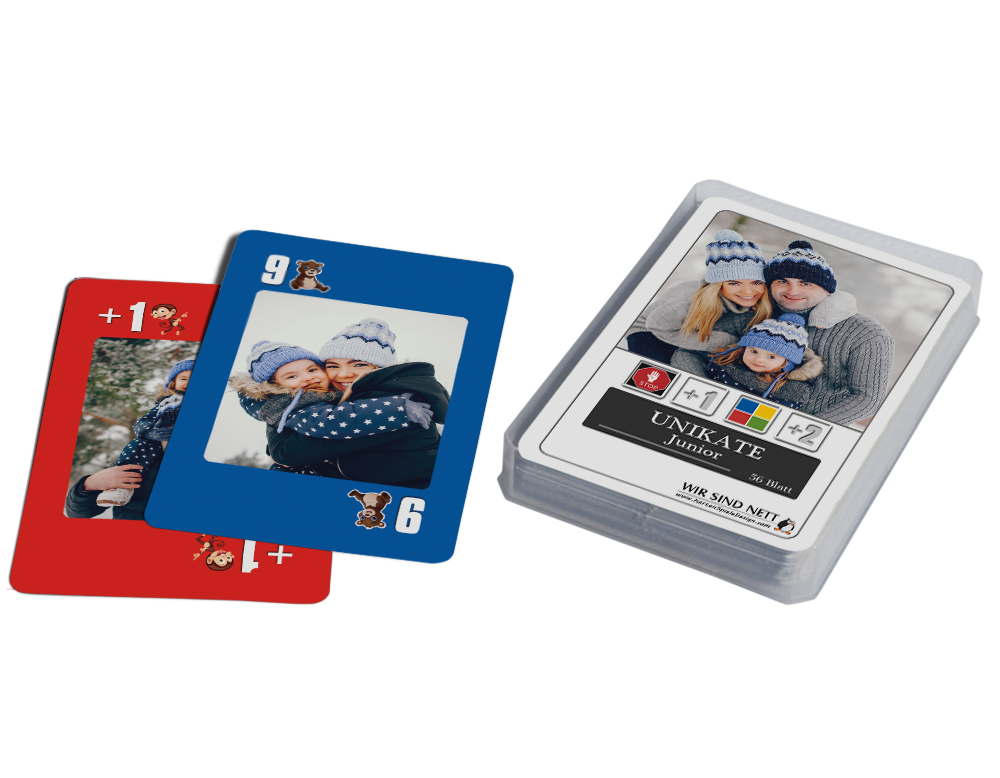 Playing Mau-Mau
1. Shuffle the cards and deal them face down (5 per player). Place the remaining pile upside down in the middle of the table.
2. Pick a card from the deck and turn it face up next to the discard pile.
3. The player who starts must place a card of the same colour or number on top of the card on the table.
4. If a player cannot lay a card, he must draw one.
5. If a player has played his penultimate card and has only one card left, he must call Mau-Mau. If he forgets to do so and the next player discards a card, he must draw 5 cards from the discard pile.

Action cards
The action cards are the heart of every Mau Mau game.

8 - Sit out The next player must sit out a round.
The 8 in Mau-Mau corresponds to the Stop card in the game UNO.

9 - Change of direction The direction of play is changed.
The 9 in Mau-Mau corresponds to the direction change card in the game UNO.

8 - Sit out + additional blocking function The next player must sit out a round. If the 8 is placed on a 7, no additional cards have to be drawn.

10 - As a special card, the 10 can be placed on any card. Often the jack is also used as an all-player card, which also offers the possibility to wish for a suit.
Queens of Clubs + King of Clubs If a Queen of Clubs is laid, the next player must lay a King of Clubs. If he has no king of clubs in his hand, he must draw 4 cards.
Undoing a suit wish You can undo the previous jacks suit wish with a jack or a 10 card.

Additional move - the card determined by the players in advance, for example the ace, offers the player who discards it the opportunity to make an additional move. Attention: This is usually an advantage. However, if the ace is the last card, another move must be made after discarding it, i.e. a card must be drawn and the game is not yet over.
The aim of the game is to discard all your cards. The player who manages to do this has 0 points at the end. The fewer points you collect per round, the better.

As soon as the first player has discarded all his cards, the other players add up their points. The points correspond to the numbers on the cards, the king and queen each count as 10 points, the ace as 11 points and the jack as 30 points.

Mau-Mau is a card game popular in Austria and Germany for 2-10+ players. A French hand (52 cards) or a German Skat hand (32 cards) is needed to play. As a rule, each player receives 5 cards. In very large rounds with 10 or more players, the number of cards can also be reduced so that a round does not take too long. For example, if there are only two or three players and you want to play a little longer, you can also start with 7 or 10 cards.

The jokers are removed from the deck for the game. From 5 players, 2 or more decks are recommended.